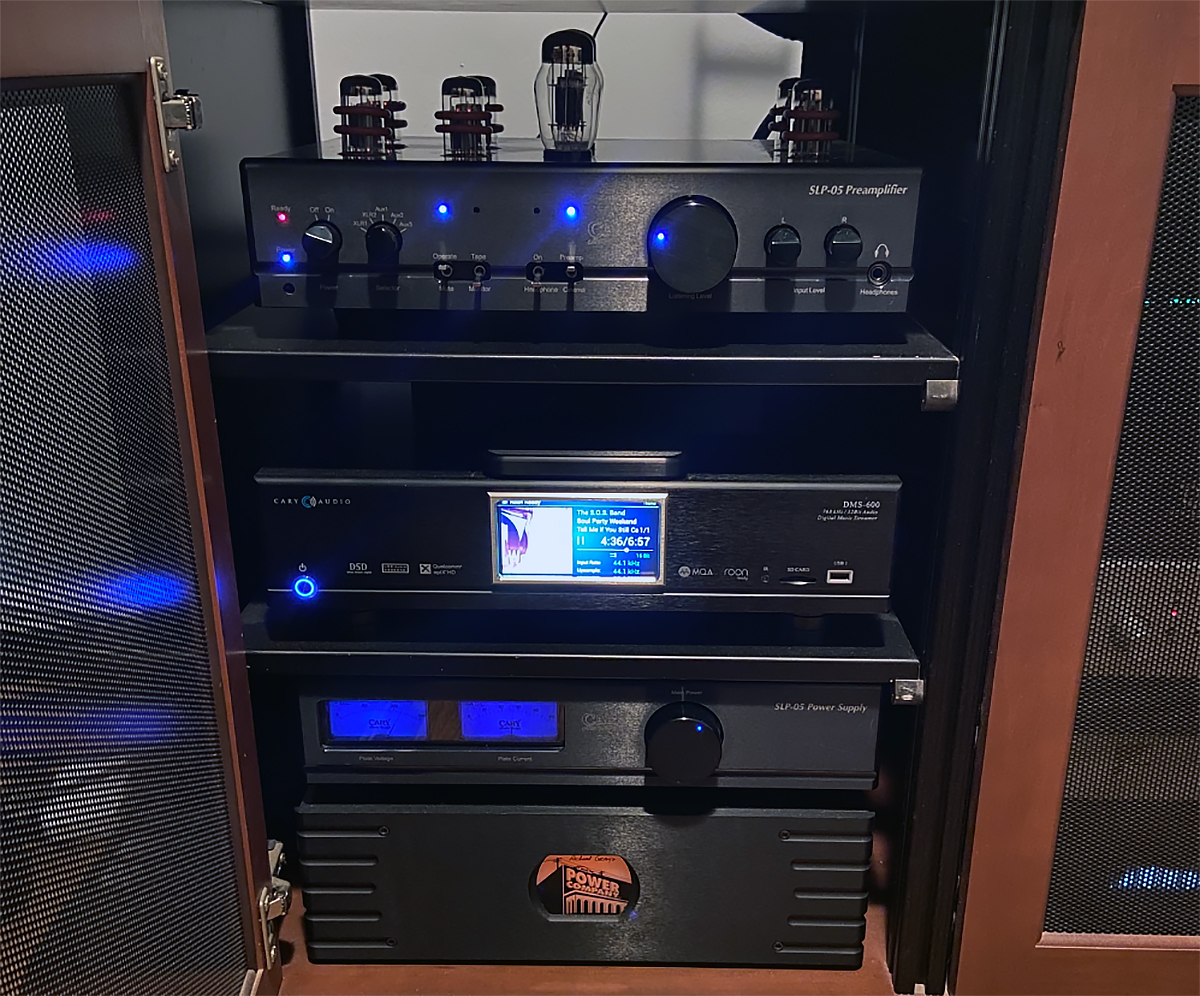 Cary Audio customer, Matt S., wrote a great review and shared a photo of his high-end audio system featuring our SLP-05 preamplifier with the Ultimate Upgrade and the DMS-600 Network Audio Player.

“In 1989, I received my first education of what a HiFi system consists of and what it should sound like. Back then, Lindsey Ward, which later became Now Audio Video/Tweeter, came to mind during that time. Unfortunately, the company no longer exists. I was proud to have an educational experience of HiFi Audio for home and car. Over time I’ve gone through countess systems in search of what I feel is HiFi perfection one could have. In the past, I spent some time in North Carolina while working at Duke University. What I call the little mecca of HiFi Audio in the surrounding area of Raleigh/Durham, I was fortunate to receive additional education from the owner of Cary Audio, Dennis Had. The first item I bought from them was a pair of Soliloquy speakers. I currently own Wilson Audio Maxx 2 speakers. At the time, I was so impressed that I created a theater setup but focused on two-channel audio within the setup. Still searching for warmth within my system as I was still not completely satisfied, I started learning about tube gear. The first tube amplifier I bought was the Cary Audio CAD-805AE (Anniversary Edition) Monoblock. I added two other amplifiers since then. McIntosh MC2301 Monoblock and my old school Krell KRS 200 Monoblock Pure Class A amplifiers. It was definitely one of the best decisions I have ever made to approve my sound. I later added a tube preamplifier, the Cary SLP-05 with the Ultimate Upgrade, tube rolled, and Cardas wired. When playing an album from my Clearaudio Reference Turntable with a Clearaudio Goldfinger Statement cartridge, the music was warm, precise, and magical. I have since moved to the VPI Aries 3 turntable with an upgraded separate motor and flywheel. With the Ayre Acoustics P-5XE phono preamplifier, I don’t experience any negative feedback throughout my system. My HiFi system is connected with Shunyata Amp 1s, Shunyata Cyclops, Richard Gray Power House, and Straightwire crescendo/serenade cables, which help bring all of the magic together. All I can say is wow! This is what music is supposed to sound like. Transparency, warmth, neutral, and precise. What synergy!!! I later added the Cary Audio DMS-600 DAC/streamer that plays Tidal (Hi-Res and MQA) and Qobuz (Hi-Res), to name a few. You want to talk about Hi-Resolution sound from streaming, especially connecting the Roon Nucleus to the unit. All I can say is that the results are astonishing. So clean and warm with no noticeable negative feedback reported. I’ve literally landed in heaven when it comes to listening to music with my setup. If one could be a fly on my wall to understand what I’m experiencing, their results would be exotic. Thanks to the Cary Audio team for building one heck of a product line.”

In my system, my components are:

If you are located in the United States and Canada, you can purchase the SLP-05 preamplifier and the DMS-650 Network Audio Player on CaryDirect.

If you are located outside the United States and Canada, please get in touch with your local Dealer/Distributor to purchase.