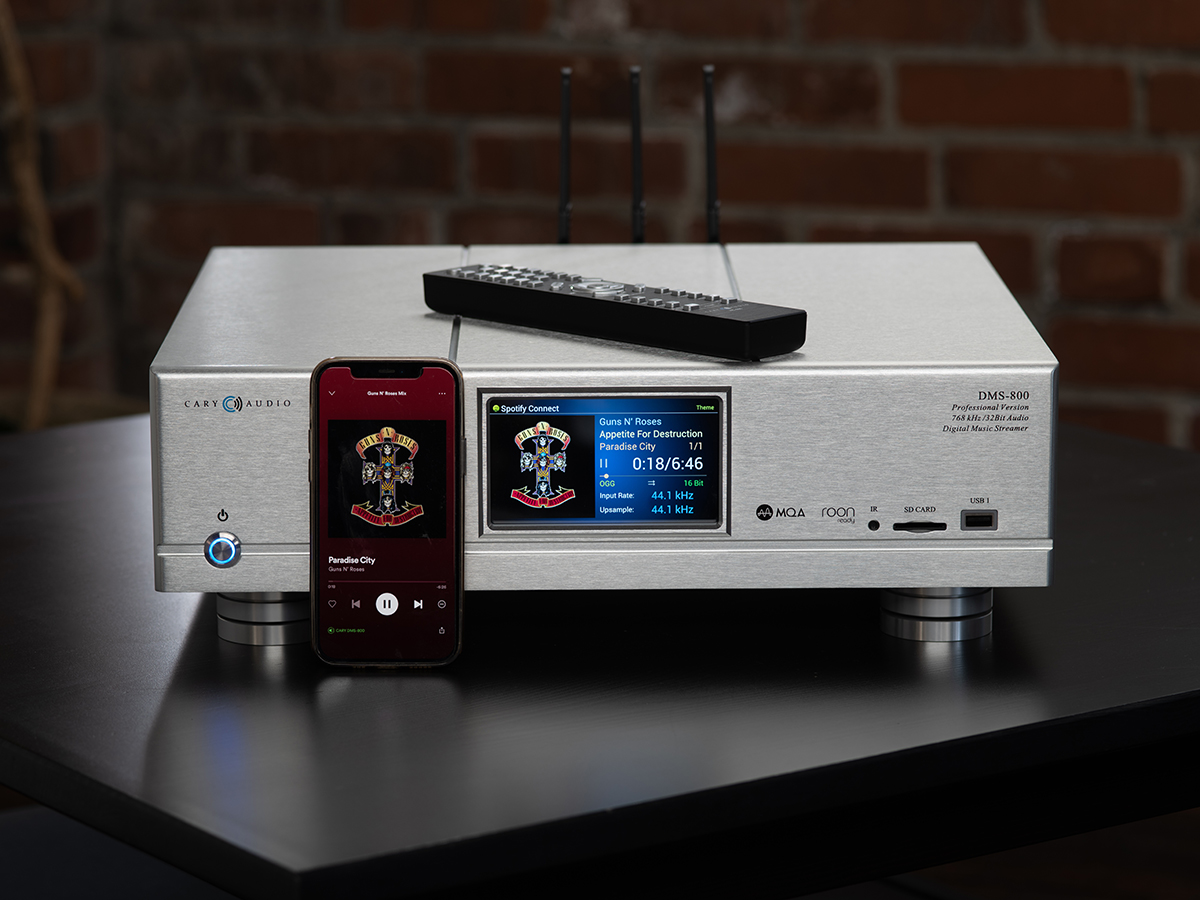 “Holy S***!” I don’t use expletives in general, especially when writing, but that’s exactly what I said after a few minutes listening to the new DMS-800PV.

Let me put it in context. I already own two DMS-700s and use them almost every day (my reviews are posted on the Cary website). When I bought the DMS-700s, I was told a fully balanced version was being considered, but was not committed to, so I happily set up the DMS-700s and used them as my main listening source. Compared to my CD/DAC setup, I found the DMS-700s just a shade short on “slam” (to be covered later). With news of the DMS-800PV finally hitting the Cary website, I bought one right away, hoping for a minor increase in sound over the DMS-700.

The DMS-800PV is easy to set up and get going. It’s a tiny bit bigger and heftier than the DMS-700, but you only notice the difference when they are side-by-side, or you lift them. It comes double boxed and safely packaged, to protect the unit. There’s the usual screw-in pointed spikes on the bottom that slip into dished feet. Connect the Bluetooth and WiFi antennas, and you’re good to set up the unit. I didn’t use the included electrical cord, replacing it with high-end cable connected to a PS Audio Powerplant 20 Regenerator. Balanced cables to my Spectral amps are AudioQuest Earth. To use the DMS-800PV, you connect the unit to either WiFi or Ethernet, using the remote and front screen or the Cary app (I have it on an iPad), then connect to your sources. I plugged in a couple of external hard drives loaded with music (there’s a 7TB limit per drive), and they were recognized immediately. I also connected the DMS-800PV to my Roon server, which also handles my Tidal subscription. The Roon app recognized the DMS-800PV as soon as I turned it on. Total time from unboxing to turning on a Tidal stream was about 15 minutes, progressing leisurely. I always run the DMSs in Pure Audio mode, and have not used it as a Pre.

To burn in the unit a little, I left it on for about 12 hours the first day, and then did the same the second day (not playing through the amp, just letting the DMS-800PV settle in). The unit didn’t get hot at all during those extended play days, just slightly warm to the touch. At the end of the second day, I went to turn off the DMS-800PV, but couldn’t help but be curious, so I turned on the amp and pre, then cued up one of my favorite reference tracks, Cardon and Bestor’s Innovations, track 4, Man Among Men, which has a spectacular attack speed half a minute in, which often gets toned down by the DAC (this was one of the issues I had with the DMS-700: it was good on this track, but not as good as my reference DAC). I turned the volume up, sat in my listening chair, and hoped I would hear a difference from the DMS-700. Two minutes later: “Holy S***!!!!”.

There were three things I noticed immediately. The first was the bass extension. It seemed lower and, more significantly, tighter than I had heard before on this track. More on this later. The second was the soundstage, which while good through the DMS-700, expanded deeper between my speakers with the DMS-800PV, bringing the individual instruments more into sharp focus. And the third was the sheer slam or speed on the Man Among Men track, easily matching my much-loved reference DAC for rise time and power, with grunt behind it to push it forward. I was sold on the DMS-800PV at that point. It wasn’t just an incremental change over the DMS-700, but a significant rise in quality of sound. I spent the rest of the evening listening to more reference tracks, with a silly grin on my face.

I listened to music every evening, after that, and on almost every well-known track I played, I could hear the difference the DMS-800PV offered over the DMS-700, and my reference DAC. I don’t in any way downplay the DMS-700 in this review; it is a great streaming device and I still play mine every day in my office, but when I want to listen critically, the DMS-800PV is the best I’ve got. Over the first two or three weeks I listened to a lot of music, totally enthralled by the sound the DMS-800PV produced. To reground myself, I reconnected the DMS-700, and confirmed the audible differences were there: they were.

I mentioned the bass earlier. It sounded, on first listen, as though the DMS-800PV went deeper than the DMS-700, but on listening to many deep-bass tracks (organ, Kodo drums, electric bass, etc) I don’t think the DMS-800PV actually goes deeper, it’s more that the DMS-800PV controls the bass better. Through my subs, the bass always had a visceral feel with the DMS-800PV, with fast attack. The bass made such a difference, I went trolling through my back catalog for 80s pop tracks that had great bass lines. Then, I listened to John Wilson and the BBC Philharmonic’s amazing Copland Symphony 3 last movement, and the bass drum thwacks are suddenly crystal clear, deep, resonant, and goose-bump creating. Even better, Simon Rattle and the CBSO performing Elgar’s Enigma (last movement) and there’s the organ entry about half-way through in what, in single-ended mode and on the DMS-700 in either mode, sounds flat and lacking soundstage, and on the DMS-800PV in balanced mode, there is suddenly a soundstage! And when the organ comes in, it’s deep, resonant, and clean…it’s wonderful the change the balanced-out DMS-800PV makes to this recording!

If you can’t run the DMS-800PV in balanced, I am not sure the audible differences between the DMS-800PV and DMS-700 would be worth the money. But switch to balanced, and it’s definitely worth the money! All my listening to this point was through my Spectral sold-state preamp and amps, which have yet to be replaced in my main system due to their superb sound. But I was curious as to how the DMS-800PV would sound with tubes, so I swapped out the Spectral for my KT88/EL34-based pre and amp. As expected, the slam and speed of the sound diminished a little, but there was still an audible difference in balanced mode for the DMS-800PV over the DMS-700. Again, in single-ended mode the difference diminished considerably, almost to the point where I could not tell the difference between the two DMS units. While I love the sound of tubes, to get the most from the DMS-800PV you need fast rise times in the pre and amp, and while some tube equipment can do this, the tube amp and pre I use wasn’t anywhere near as good at presenting the sound as my Spectral solid-state gear was. This was even more noticeable on MQA tracks from Tidal. A caveat: my tube amp and pre are not super high-end units; I would love to hear the DMS-800PV on Cary’s monoblock CAD-211FE tube amps in balanced mode!

Another interesting comparison was when I moved the DMS-800PV from my main reference system (Spectral amp and pre, coupled to 25-year-old ProAc Response 4 speakers) to a secondary system using Martin-Logan electrostatic speakers and Mark Levinson pre and amp. The MLs sounded wonderful, especially on jazz and smaller-ensemble classical tracks, but didn’t have the sheer slam of the big ProAcs on energetic tracks (the midrange on the MLs is superb, but the bass is not as strong, a well-known issue with electrostatics). Switching from balanced to single-ended, the difference between DMS-800PV and DMS-700 again practically disappeared through the Martin-Logans.

Finally, I moved the DMS-800PV to my office system, using Michi pre/amp driving Monitor Audio Silver 500 speakers. I usually use my second DMS-700 in this system and it’s on most of the workday, so I know its sound well. Putting the DMS-800PV in this system in balanced mode did reveal an audible difference, but once again in single-ended mode the difference pretty much disappeared. To get the best from the DMS-800PV, you need to run it in balanced mode through equipment and cables that can do it justice.

Just for fun (and quite honestly so I could justify the money I spent on the PowerStation 20 and all those over-one-thousand dollar per electrical cables) I took the PS Audio out of the chain and ran the DMS-800PV into the wall socket with its supplied electrical cable, and…well, it’s different. The soundstage wasn’t as deep and wide in balanced mode as it was with the PowerStation inline, but the effect was not huge, but it was noticeable. Phew! My investment in the PS Audio regenerator was justified!

The DMS-800PV is easy to set up, easy to control through the app, and sounds wonderful in balanced mode. Since I put the DMS-800PV in my main reference system I have not turned on my CD transport and reference DAC once; a direct comparison of that chain to the DMS-800PV will come soon enough, but for now, after all this experimentation, I want to simply let the DMS-800PV wow me with its sound. And it does, every time I listen to it.

So what’s the bottom line here? If you have a high-end system, value resolving power, and can afford it, the DMS-800PV will make an audible difference to your listening sessions, significantly so in balanced mode. The DMS-700 is a great fallback at half the price, if stretching the budget is not an option. If you need to use the DMS in single-ended mode, then it’s a much tougher decision to move to the DMS-800PV. But if you have high-end equipment and can support balanced connections, you can have your own “Holy S***” moment!”

If you are located in the United States and Canada, you can purchase the DMS-800PV direct from our factory on CaryDirect.