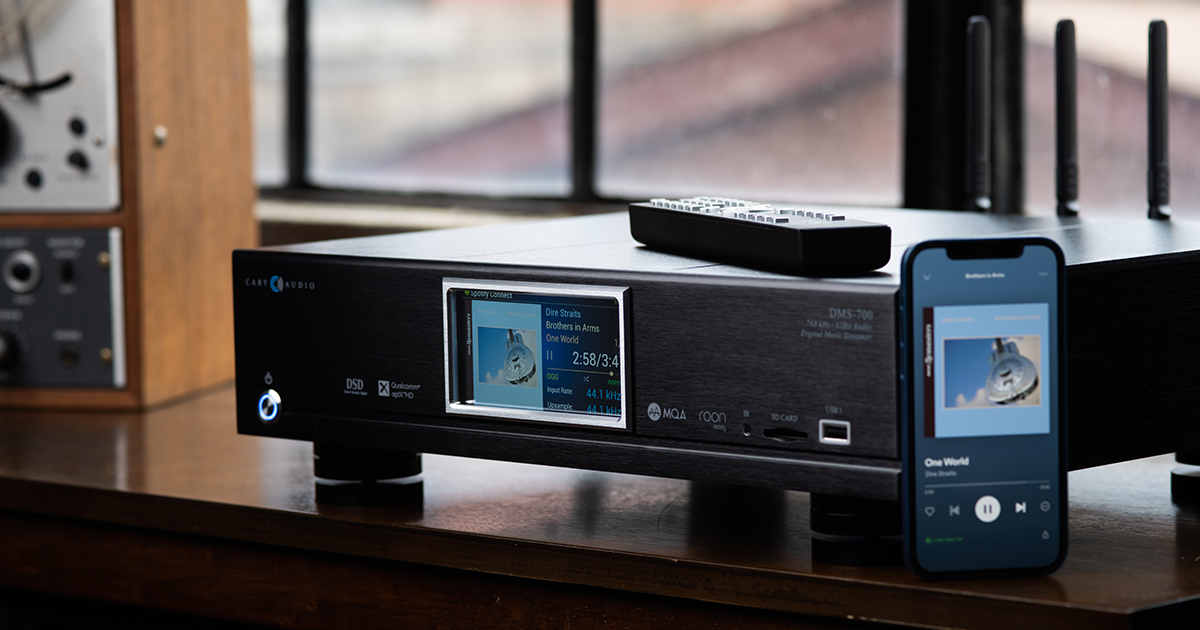 “I spend about 40% of my time in SE Asia, and when there I want to listen to my music. Carrying a bunch of CDs and LPs from Canada to Vietnam every trip is not something I want to do, so I used to use a laptop output through an Audioquest Dragon USB DAC to a set of Monitor Audio speakers, but the quality was not what I wanted. To try and get by the problem, I tried several devices that can read a USB drive with lossless files stored on it. An Onkyo network player (not available in North America, I believe) was the first attempt, but the built-in DACs were not great. Next up was a Cayin I-DAP6 feeding a Cayin I-DAC6, and that was quite a bit better, and provided a solid experience. Most of the critical listening there was done through headphones (Audeze LCD-4 or Sennheiser 820) which came across well, but not close to my reference system at home. So, when this Cary DMS-700 popped onto my radar last year, I thought it might be a good solution along with a NAS. I ordered it pre-production, so when it arrived three weeks ago, I jumped at the chance to give it a try.

The first shipments of the DMS-700 came without a printed manual, and there wasn’t one on the Cary website as I write this. Still, the quick-reference sheet that does come with the DMS-700 was enough for me to get the device connected wirelessly to my network. Plugging in a 4TB external USB drive on the front slot had the device appear immediately on the Cary app on my tablet. I could easily surf through the folders and play audio from the DMS-700 into my preamp. Knowing it would take a while to burn in, I left the player on Shuffle mode for 8 to 10 hours a day for five days before sitting down to give it a real listen.

A couple of notes before getting into listening impressions. The app is better than many I have tried, and it worked well throughout use so far, although there are a few minor inconsistencies and annoyances (but that’s a different story). It allows for easy selection of music off a connected device, and, handled both direct-connected and networked hard drives loaded with music files. After a little experimentation I managed to stream Primephonic through the Bluetooth connection from the tablet.  I didn’t get the DMS-700 to connect to Primephonic directly, although it could with my Tidal account.  Perhaps to come. The remote control is quite sizable, and offers a lot of options, most of which I don’t think I will ever use, but others might.

Sneaking a listen to the DMS-700 while it played through random tracks, it sounded good but…not near as good as my existing system. Listening to some favorite tracks, they lacked clarity, punch and deep bass extension. But this was pre-adjustment and early in the burn-in cycle, so I hoped for the best and waited a few more days.

After I had broken the DMS-700 in for five days (about 60 hours total play time), I sat down one evening to listen critically and see what the DMS-700 sounded like compared to a feed from my CD player (Accuphase dedicated CD transport feeding into my favorite DAC, a Sonic Frontiers Processor 3). I tried both the XLR and RCA outputs of the DMS-700 into my Spectral DMC-12 preamp (Audioquest Earth cables, which I find to be superb interconnects). The DMS-700 allows you to adjust the output volume to the pre, so I could level-match quite accurately by ear (and by a dB meter to confirm) and got the levels within 0.5db, the finest granularity I could achieve. My plan was to compare the DMS-700 with my regular setup and decide whether the DMS would end up as a background music player or a centerpiece of my system. Certainly, selecting tracks off my tablet to bounce around my music library was a lot easier and faster than switching CDs or LPs.

First task was the play a few favorite tracks from Cardon and Bestor’s Innovations, which has a real kick to the up-tempo notes through the Sonic Frontiers DAC and Spectral Pre and Spectral Amp (which feed ProAc Response 4 speakers in a dedicated listening room). During my sneak listening a few days earlier, none of the speed and slam was there from the DMS-700, so I approached the comparison session with some resignation, assuming I would be disappointed and maybe have to feed the digital out from the DMS-700 into my Processor 3. So, I turn up the volume to my preferred level, and bouncing up and down from my listening sofa to the preamp input selector (no remote on that model!) I was surprised that the DMS-700 sounded just as fast and snappy as the CD-feed. The sound had evolved quite a bit from the early listening session, so much so that it was hard to hear the difference in the two feeds. It was there, but the differences are extremely subtle and I can’t say which I really liked better.

Put on Nagano and the Montreal Symphony performing Saint-Saens Symphony 3, last movement, always a goose-bump inducing organ blast for me, and the DMS-700 was once again up to my reference sound. Yes, a wee bit different, but that’s the difference in DACs, I believe, and neither is better or worse than the other, just a little different. That night I spent the next five hours happily going through favorite tracks, comparing CD to DMS-700, and found the two to be close enough I couldn’t identify which was which in a blind test.

On classical music, the DMS-700 threw a wide soundstage, perhaps even wider than my CD player output (which may be due to the direct feed from the DMS-700 to the Pre, while the CD player output goes by digital coax to the DAC, then to the Pre through balanced MIT cables. On pop, the lower bass was there, pushing my SVS Ultra subs to clear, deep sounds, perhaps with a bit more extension than the Sonic Frontiers DAC managed.

The Sonic Frontiers has been my favorite DAC for years; I have tried several other well-respected DACs over the last decade, but the Processor 3’s (now old) UltraAnalog balanced custom DACs have always sounded better. The DMS-700’s AKM AK4499EQ sounds just as good, though…and maybe better. I have not heard this DAC in other devices (I think the Cary is the first to use it) but previous AKM DACs I’ve heard didn’t sound as good as this DAC. Comparing DACs tend to be a time-consuming process as you listen for differences, but the DMS-700’s circuitry sounded fantastic at first critical listen (after burn-in). So much so that I have not been using my CD/DAC line for the last two weeks except to listen to comparisons.

The DMS-700 allows oversampling or conversion to DSD. Over the past week, I’ve gone through all the settings, trying to hear differences. You can switch on the fly using the app, and while I think I can hear subtle differences, I am not convinced I can reliably report on which is better. Assuming more is better, I went for the highest oversampling rate for my comparisons, but I also popped into DSD a few times to see if I could hear the difference. A lot more experimentation is needed to be more certain of differences; for now, I can’t say which is “better” other than all sounded good (even Bypass mode!).

OK, a lot of words. End result is simple. While my first listening to the DMS-700 was disappointing, after burn-in and with a really good set of interconnects, this is an amazing device. I can see myself using the DMS-700 for 95% of my listening, reverting to the CD player just to make sure I am not hearing things! Whether through my big ProAc speakers or one of the headphones I keep around (mostly through Sennheiser 820s) I have been impressed with the DMS-700. So much so that I plan to buy a second for Vietnam, leaving this one here for my day-to-day listening. This is my first Cary device, although I have often thought of buying the Cary tube amps to use as an alternative to the Spectral DMA-180, and this experience has been wonderfully positive.

The DMS-700 is not cheap. But, based on the listening I have done to other network and streaming devices, this is the best of the bunch. Highly recommended.”

If you are located in the United States and Canada, you can purchase the DMS-700 direct from our factory on CaryDirect.