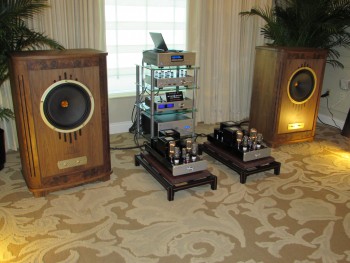 This year’s CES was quite successful for Cary Audio!

Jon Iverson from Stereophile mentioned our new products the DMC-600/DMC-600SE, TL-300d and DAC-200ts in his CES show reports.

Click here to view our full photo album from the show!

While the DAC chip(s) are a piece to the overall solution in creating a reference level digital source machine, it’s just one part of a very complex puzzle.  As DAC chips become smaller and more powerful with multiple channels per DAC and onboard processing, one could design a good product utilizing perhaps just one chip, maybe two chips, as many do.  We choose to use 3 (DMC) and 4 (DAC & TL) DACS consisting of 6/8 channels, 3/4 channels per side.  This makes for an outstanding product.  This configuration is a fully balanced parallel circuit feeding both the balanced XLR and single-ended RCA outputs for exceptional clarity and detail.

Bluetooth modules are a fantastic and convenient way in which to share and listen to music from online and mobile sources.  It’s not unusual for companies to use such modules as a complete end-to-end or add on solution whereby using the cheap low-grade onboard DAC chips included in the modules and simply passing the analog signal of the module to the analog output section.   Our solution is to fully integrate (fi™) the digital information of the CSR aptX® lossless Bluetooth receiver into the entire digital circuit.  This approach ensures that Bluetooth sources have the potential to sound like any other expensive input source whereby utilizing our sophisticated digital topology of multiple parallel DACs and our other integrated digital features such as; TruBit™ Upsampling, OSO™ Reclocking, and DiO™ selectable tube or solid state outputs.  Now your Bluetooth sources can truly be high fi.

Upsampling can be messy, leaving behind lots of digital artifacts resulting in noise and inaccurate signal generation.  On the surface, upsampling may seem like a good idea.  But if not implemented properly it can be disastrous.  Many DACs use modest DSP chips at best, or worse, the DAC chip itself to upsample all incoming I2S and SPDIF digital signals.  Typically, this is done as a predefined one-size-fits-all sample rate, such as 96 kHz.  On the contrary, Cary Audio’s TruBit™ Upsampling is a sophisticated and powerful process utilizing a dedicated 128 bit DSP engine which allows for up to 7 different selectable TruBit™ sample rates and an increased bit depth of 32 bits.  Working in tandem with our OSO™ Reclocking feature, the newly generated signal is cross-checked multiple ways ensuring that the selected upsampled rate is as if it were an original native signal.  The result is a signal free from digital artifacts that sounds accurate, pure, and a joy to listen to.

Once a digital signal is transferred into Cary Audio’s digital ecosystem via the digital inputs or CD, it is processed with extreme care to ensure the best possible sound achievable.  As a digital source transfers from one point A to point B it creates an insidious digital problem called jitter. To deal with this, Cary Audio uses something we call OSO™ Relocking.    While USB Asynchronous inputs use the XMOS processor to control the clocking of the USB host, other non-USB sources don’t have this luxury.  Our solution is to reclock all signals again once onboard, even XMOS USB, as to ensure all jitter is virtually eliminated to a minute degree.  We call this OSO™, short for “Onboard Signal Origination” because this reclocking and buffering creates a signal so stable and jitter free it’s as if the origin of the signal was generated onboard and not from an external source.

XMOS is the de-facto standard in USB Audio 2.0.  This design delivers bit perfect PCM audio up to 384kHz, DSD and DoP format support, round trip latencies as low as 3ms and use asynchronous clocking for computer USB sources. This means the DMC has complete control over the audio clock quality; essential for no-compromise digital audio systems.

For decades, Cary Audio has made some of the world’s greatest vacuum tube and solid state audio products.  DiO™ stands for “Dual Independent Output” meaning it can switch between a vacuum tube analog outputs or a solid state analog output.  Not to be confused with a hybrid design where the attributes of both tubes and solid state devices are joined into the same circuit for a combine sound that always has the same characteristic.  While a hybrid design is typically better suited for an amplifier or perhaps preamplifier, it’s not the best design for source products because of the wide variation of source material, i.e. recordings.  To deal with this, Cary Audio’s DiO™ Analog Stage is actually two separate analog output stages that are completely independent of one another.  One is all solid state and the other is vacuum tube.  Depending on taste or source material, the analog output can be switched on the fly from tube to solid state and back again, again and again.  It’s like having two source machines in one allowing you to get the most out of your recordings.